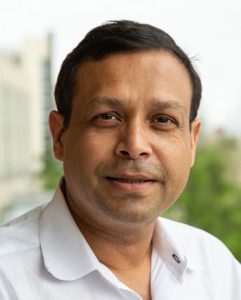 Alamgir Karim obtained his Ph.D. in Physics from Northwestern University in Illinois in 1992. He did a post-doc in Chemical Engineering at the University of Minnesota through 1993 before joining the National Institute of Standards and Technology (NIST) in Gaithersburg, Maryland. He was Group Leader of the Polymer Blends, Combinatorial Methods and Nanomaterials Group at NIST. From 2009 to 2017, he was Goodyear Chair Professor of Polymer Engineering, and from 2010-2016, Co-Director, Akron Functional Materials Center at the University of Akron. He held administrative positions of Associate Dean of Research and Institute Director at the College of Polymer Science and Polymer Engineering at the University of Akron from 2012 to 2016.

In the fall of 2017, he joined the William A. Brookshire Department of Chemical and Biomolecular Engineering at the University of Houston (UH). His current positions include Dow Chair Professor, Director of the Doctoral Materials Program, and Director of the International Consortium for Polymer and Soft Matter (ICPSM) at UH. His areas of interest and research include polymer nanotechnology of thin films, surfaces and interfaces related to energy, and sustainability and human health. Polymer systems of interest include nanoparticle polymer systems, patterning polymer films, polymer blends phase separation, polymer thin film nanocomposites, elastomers based systems, block copolymers thin film ordering, as well as polymer thin films and processing methods for functional applications. He has an h-index of 65, has published over 250 papers, has edited several books in these areas of polymer research, and has organized several international conferences on these topics. He is a Fellow of the American Physical Society (APS) as well as Fellow of American Association for the Advancement of Science (AAAS) and recipient of Keck Foundation Award.